The real deal or just a demon’s forgery? I remember having seen some slick preview videos and magazine ads for Hunted: The Demon’s Forge several months ago. It looked sufficiently dark, and the graphics looked sharp. It seemed to have the hallmarks of a game that could be promising. I filed it away at the back of my mind and promptly didn’t hear anything about it for a while. Then, just a few weeks ago, I saw that it was being released the week I was on vacation. Knowing I had a good paycheck coming in the mail and would have the time to play it, I preordered it at the local GamePawn and awaited its arrival. I picked it up on the last day of May and played it later that evening.

I’m not sure what it was I thought would be delivered, but I didn’t quite get it. This isn’t to say the game wasn’t enjoyable – far from it. But, with the scant press this game got, it was hard to make any kind of guesses as to what to expect. All I knew was that it would look pretty. 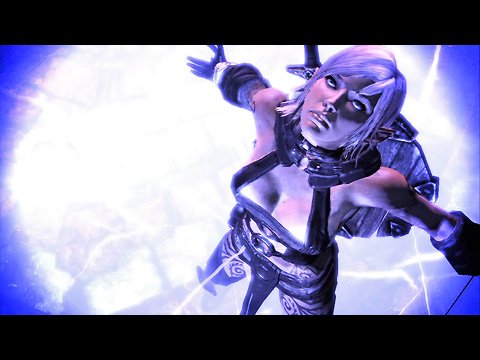 And, inappropriately dressed for battle.

The game is definitely meant for the Gears of War crowd. This doesn’t push it outside of the realm of what I usually play, though Gears isn’t something I’m enthusiastic about. The gameplay from the Gears franchise has been adopted into gamer canon and is now heavily in rotation, so Hunted’s brand of cover acquisition, targeting and level navigation should be familiar to a wide audience of gamers. Where the game departs from the Gears interface is the ability to switch between characters at fixed points and a skill-tree style progression scheme that makes your character not only better armed in terms of weaponry, but in terms of battle techniques and support roles. The game also allows for local split-screen play – a godsend for multi-player aficionados who don’t want to have to play with a friend that isn’t in their house. I prefer playing two-player style with my teammate in the room with me, so this is a definite plus.

In the event you don’t have a buddy to play with (which was my situation), you get an AI controlled support character that actually isn’t too stupid for once. Furthermore, you’re not confined to the character you start as (E’larra, the provocatively dressed elf). At certain points in the game you can swap out and play as Caddoc, the warrior type, and back again if you so wish. Personally, I find myself at home with ranged combat, so I spend a lot of time playing as E’larra as she has bow magics to unlock… and, personally speaking, it helps to look at a female ass bobbing up and down in front of me if I have to look at an adventurer’s backside for a few hours at a spell. Caddoc brings old-fashioned, warrior-needs-food-badly gameplay to the fray with an assortment of attacks and magics bent around pummeling, hacking and throwing opponents until they stop moving. Both classes have access to more magical, non-weapon related tricks as well, meant to immolate, shock or otherwise impede your enemies. The only thing that boggles my mind about the game is the inability to jump on command (you can be seen jumping at various, controlled points), and the seeming impossibility of opening a door once you’ve gone through it. I understand it’s a low-tech game, but… automatic locks are high tech. I’d really like to be able to return to a zone I’ve left – particularly if I left by mistake, which has happened a few times. 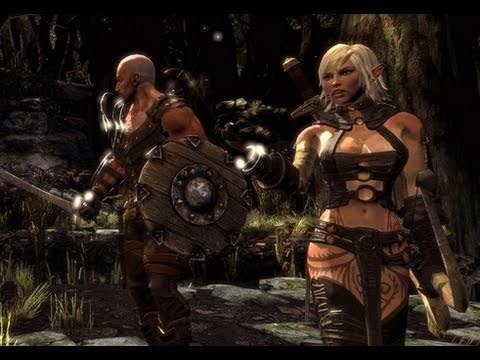 You’d think that with this kind of weaponry that these two could break down a freaking door.

Insofar as story, the game doesn’t particularly shine. It’s very linear, with a focus on taking orders from the mysterious and scantily-clad Serafine, who is probably not to be trusted. You more or less dash from point to point to get to the next checkpoint with mostly repetitive tasks involving a lot of traditional hack and slash. Occasionally, the game throws you a bone though in the form of side-quests and hidden zones (to find them simply take branches that the games auto-guide feature doesn’t direct you toward). These quests grant access to further power-ups and weapons and allow for more puzzle-oriented tasks, giving the game a very Soul Reaver: Legacy of Kain feel if you’re into that sort of thing. It also ensures that you’ll have the magical might to take on your enemies after a brief conversation with your gothic goddess, Serafine, as there’s a portal that summons her after most of these side-quests, allowing you more frequent access to cash in crystals for power-ups. 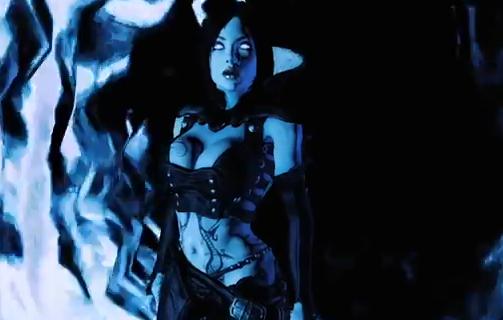 What else might she do for crystals? Hey, don’t look at me like that. Her tramp stamp actually covers her entire body.

And, good lord are there a lot of enemies. Periodically, you find yourself in a situation a la Gears where you have a ballista, a catapult or the fantasy equivalent of a Gatling gun (all with infinite ammunition) to mow down your foes. Sometimes they put you in a death trap and simply pour enemies into an area until you’re forced to drink this vile fluid that turns people into monsters, allowing you to partake in a five minute murderfest in which the game simply removes your health bar and gives you leave to stomp so much ass that your foes will require colon transplants – if they live. 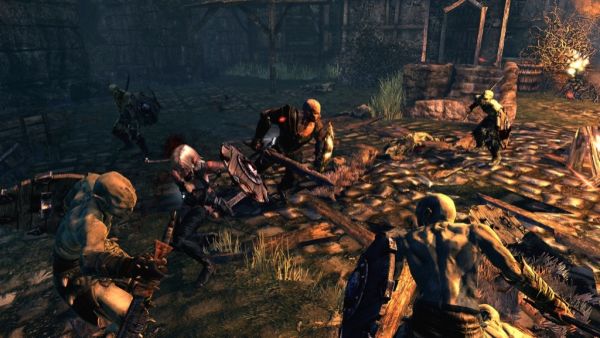 Which, coincidentally, they won’t.

Overall, it’s a solid entry. I can’t say it’s blown my mind, but it has provided me with plenty of good fights as I continue my playthrough, and I imagine I’ll have some replay value as I go back through the game again as Caddoc. I’d recommend the game for the Gears crowd, particularly if they thought all Gears needed was more chainsaw.

This review is based on a copy of Hunted: The Demon’s Forge purchased by Hey Poor Player.

You’re a Wizard, Thief, and Knight, Harry! Having never played a title in the Trine series prior to Trine 3:The Artifacts of Power, I would never have guessed it…