Well, it’s been three and a half weeks into the DC Universe Online experience. Like any other MMO, it’s rather difficult to review or even form more than a surface impression (as done in the last post concerning DCU) after only a day or so of activity, so I figured it was time to finish the review. Now that I’ve had some time to play it more, I can tell you that the game has more or less dominated my playtime hours, meaning I can give you more insight into the game.

First of all, I regret to inform you that this game is very, very good.

Why would I regret something that is very good? Well, that’s easy – this game will destroy your life. I’ve pretty much played it to the exclusion of all other games that aren’t tabletop related, and have found my other life aspects cramped on account of it. Regardless, it is quite enjoyable.

Since the last time I wrote, I’ve created a primary toon, Lytning Stryke. She’s a re-creation of my favorite toon on City of Heroes, albeit one that has almost NONE of the original inspiration powers. The ability to shoot lightning out of your hands is sadly lacking thus far, though I did get the Word of Strength iconic power which mimics that of Shazam, so there’s a little lightning there. Other than that she CAN shoot energy beams (though they’re the purplish-mentalist type as opposed to raw gouts of brilliant yellow power).  Lyt has been prowling the streets of Metropolis, for the most part, defeating the likes of some names that may sound familiar. Harley Quinn. Gorilla Grodd, Bane. Giganta. Doctor Psycho. Doctor Blood. Poison Ivy. She’s had to have logged several hours easily by now. And it’s been enjoyable.

In the name of research, I’ve created about five other toons just to get a couple things straight in my head. The power sets you have to choose from are a bit limited. Fire, Ice, Sorcery, Nature, Mental, Gadgets are the basic six, though they diversify since the Powers sources all have two branches in which to focus. There’s always a DPS component meant to dish out at the least moderate damage, and then gives you secondary roles such as a tank, controller or healer. Furthermore, you get Iconic powers at level ten, allowing you to get certain DC flavored abilities like Batarangs, Heat Vision (a personal favorite) or Word of Power (Shazam!). You also get a little more flavor by a wide selection of weapons. The weapon set is comprised of many more options, like Dual Wield Pistol, Rifle, Bow, Hand Blast, Martial Arts, Brawling, One-handed, Two-handed, and Staff. The result is a more even-handed blend than in other superpowered MMOs. You find yourself able to do a little bit of everything if needed, but still able to fill roles in a pinch when you have to.

But, as they say on television, that’s not all. As mentioned earlier, you get the DC universe as the background, an environment that has been growing and evolving since before HPP’s readership was born and then some. The developers have gone out of their way to make sure that you get an experience that makes you feel like you’re in the world they’ve been cultivating since the golden age of comics. The practical upshot of flying through Metropolis makes you feel like you’re actually in their fictional city. The feel is just right for either hero and villain.

Did I not go into the subject of villainy last time? Allow me to confirm for all you anti-social or plain old self-interested players, villainy is, in fact, an option. I created a single villain, Hexanna (a dual-wielding sorceress) and ran her through Gotham under the Joker’s tutelage. If you decide to take the dark path, you can most certainly indulge in several nefarious activities, including screwing with other crime groups, bribing cops and generally causing problems in the streets of Gotham. I suppose you could do it in Metropolis too.  In fact, I’d count on it. However, I tend to cleave to tradition. You wanna be a bad guy, you probably want to go to Gotham. It always sucks to have Supes come and crash your party.

There were few problems insofar as the relentless grind that most MMOs put you through. At least until level 21. I’m not certain that I’ve gone and done everything I could, but it certainly seems like my mission options have dried up. I’m stuck at level 22 on a mission that is very difficult without others to aid me. I may be stuck there for a while unless I can find some other missions to run or bounties to collect.

Which brings me to some of my perceived shortcomings of the game. First of all, I hope you like Pick-up Groups, ’cause PUGs are the name of the game. Get ready to suit up with a great variety of player types – most of which are not entirely the best to play with. I’ll admit, I was learning the ropes too. I play a controller class character though I have DPS and like to use it. Playing as optimally as I could? No. But, there have been some folks who simply make me look like Einstein.

Add to this that almost no one is communicating through voice chat or actual chat – because it’s a pain in the ass – and you find yourself in slugfests that quickly destroy every piece of equipment you have and leave you with a heavy repair bill (one of my alts, Senor Chang, had to be financially bailed out by Lyt).

Other shortcomings include the occasionally flaky servers. This is not a huge problem mind you, but when the servers tank they mercilessly dump you from the game. And I don’t mean that it sends you out to the loading screen. It clamps the PS3 down like a prison during a riot. You have to actually quit the game and reload everything back up.

All in all, though, this game has been fantastic. I have a thing for superheroes, always have, and it satisfies my need for vigilante justice in bright primary colors quite well. I imagine I’ll be playing this game into the future… and paying the goddamned subscription fee.

I’d give this game a four-out-of-five stick rating. If you have the time and cash to sink into another MMO, this one is worth taking a look at.

Full disclosure: This review is based on a review copy of D.C. Universe Online purchased by Hey Poor Player. 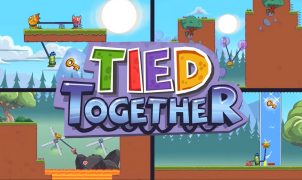 Simply Knot Enough     Making a game exclusively multiplayer is a risky move. If you want it to do well, you really have to know what you’re doing.…