Chances are that if you’re a thirtysomething male gamer like myself, you remember Boob Rai… uh, Tomb Raider, being released for the original Playstation in the ’90’s. You’ll also remember Tomb Raider II. And Tomb Raider III. Then Tomb Raider: Underworld. Tomb Raider: Underwear. Tomb Raider: The Search For More Money. Tomb Raider: Look At These Freakin’ Boobs! You get the idea. Lara Croft has been around for a long time. We get the point. She’s an obtainer of rare antiquities, she kicks ass, and I imagine she has a real difficult time finding bras in her size. 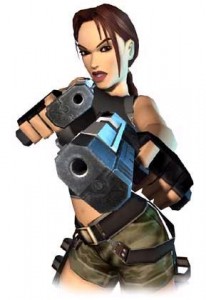 My eyes are up here. And I have guns.

So,  imagine my surprise when about two months ago, I see a news article in Penny Arcade (a daily favorite webstrip of note) coming my way in which they actually mention the virtues of the newest Tomb Raider title: Lara Croft and the Guardian of Light. Virtues! They spent a fair amount of time savaging not just the TR games, but the intellectual (or lack thereof) property itself, and have done so for, at the very least, the past eight years.

Curious, and more than a bit incredulous, I went to XBLA and downloaded the demo. I found their initial reports to be correct. There was a game in there.

It took me a short while to get my next check in so I could spare the ducats to get the full version. Luckily it didn’t cost all that much at 1,200 MS points ($14.99 on PSN), and I began playing. I must admit to being pleasantly surprised. 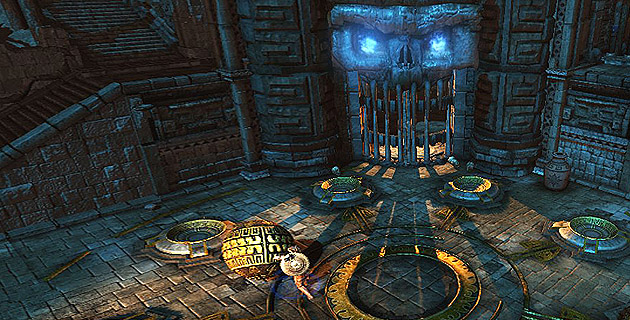 There’s a ball joke in here somewhere that I’ll refrain from. Wait. Was that a ball joke? Dammit!

The game is very much meant to be a platform/puzzle title much as the original was. The only real difference between the two is the game’s three-quarters perspective vantage as opposed to the original third-person, over-the-shoulder vantage (or better known as ‘butt cam’ in this series). Well, that and the controls are pretty simple and you can’t see Lara’s jugs jiggle with every step.

The result is a rather fun gaming experience. The goals of the title remain similar to its forebears: shoot, bomb and spear-throw through level after level of trap and monster infested Aztec ruins for fortune and glory. Oh, and to save the world from Xolotl, the Aztec god of sickness and deformity. And boy does that show in the levels you traverse.

I have yet to complete the game, but have found it to be quite worth the expenditure. The gameplay is solid if somewhat simple, with controls that are pretty intuitive. The spear function actually allows for some tricky navigation into areas that otherwise would be inaccessible, and as you play you get both vital and optional powerups and weapons which add a little more oomph to your power level. For those who are of a mind to quickly blast through levels to get to the finale, I imagine that you can play the game that way, but it holds several goals for the hardcore gamer as well given its ‘gotta catch ’em all’ aspects when it comes to collecting relics and overcoming level specific challenges. The presentation is well rendered and the cut scenes are surprisingly detailed for a game that you can download on the XBLA service. The story is thin at its heart, but honestly, this isn’t an RPG. If you came to an XBox Arcade game looking for a grand story, you have bigger problems than saving the world from Xolotl.

All of that said, I enjoyed the game much more than I would have given credit for were it not for Gabe and Tycho at PA. I recommend it for at least a few hours of passable entertainment and fans of the series – though if you were just a fan of looking at Lara’s chest you will be sorely disappointed.

This review was based on a copy of Lara Croft: Guardian of Light purchased by Hey Poor Player 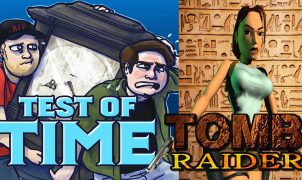 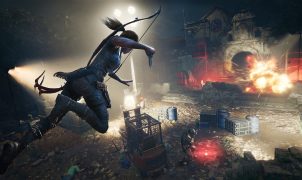 Shadow of the Tomb Raider Review (Xbox One)