Don’t stop me now! I’m having such a good time! The 1980’s were really a very different time. Videogames were changing. Pac Man was giving way to a new generation of Italian plumber hegemony, 8-bit was making a serious impression, and Rampage was released into the arcades of America. Up to this point, video games were played with the spotlight on the good guy; saving princesses, overthrowing digital overlords, or the acquisition of virtual wealth.

Not so with Rampage.

Rampage was the first game I remembered that broke that mold. I was eight, and had newly discovered roller skating. It seemed to be something all my friends were interested in and were good at. I was pretty good at falling and holding on to the wall, so it was no big surprise that I found myself staring at game cabinets in the adjoined arcade. This was where I first saw a game that distinctly was not about saving heroines, chasing ghosts or anything that could even be mildly mistaken as ‘good.’ Rampage was about tearing shit down because it seemed like a good thing for a gigantic gorilla, lizard and werewolf to do. The goal of the game was pure mayhem. As a giant monster, you were obligated to, well, rampage through major American cities, destroying buildings, eating people and fending off the military trying to stop you. What we in the modern age refer to as good, clean fun. If punching buildings into rubble wasn’t your thing, you could always take out your aggression on your buddies too, smacking them around and causing them to turn back into the pathetic humans they used to be. It was beautiful on both the conceptual and graphical level.

I stared, enrapt with this game where you could play a monster. My parents did not believe in arcades however (a waste of money they said), so I was without quarters to play. But, I watched all the same. It was amazing. These gigantic beasts climbed buildings, smashed tanks, beat up on each other and ate people. It was like having the world turned upside down. Fortunately for me, my parents did believe in home consoles (more bang for the buck) and Activision wasted no time in porting the Bally-Midway classic into Master Cartridge form. While not as flash as its arcade counterpart, it was an incredible game! It did everything the arcade game did, and well. Most arcade ports from the eighties sucked, but this was on top of things barring graphics. The controls were spot on, the game play instinctive, and it got even better if you had a friend to play with (or beat up on).

I even got a chance to go back and play it recently after finding my old Master System bundled up in my parents’ basement. I took the system back to my place and started playing Rampage as soon as I could. You can play through in a half-hour and there’s not a lot challenge (made it through the whole game on a single life), but good god it was just as fun as I remembered it being. This was a formative game for me, and as such, it gets the full on five out of five rating. 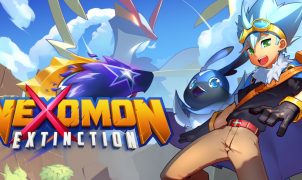 Gotta Tame ‘Em All, Nexomon!     I’ve been in love with monster-collecting games for a long, long time now. I don’t care if it’s Pokémon, Yo-kai Watch, Shin Megami Tensei, or…